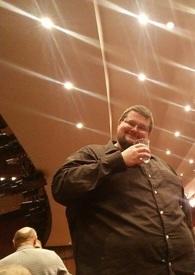 I have re written the about me section of my profile and would appreciate any feedback please:

Hey there, my name is Richard but most people call me Rich.
I currently work as an IT consultant and I really enjoy the different challenges it offers me on a daily basis. The downside is I work in a small office so it does not give me much opportunity to meet new people and I spend most of the day at a desk.
I have been making some big changes in my life over the past few years, pushing myself out of my comfort zones and have been having a great time in the process. My friends would describe me as a focussed motivated nice guy with a laid back fun approach to life, although I do take things seriously when I need to.
I like a wide range of music but my favourite feel goods would have to be any power ballad from the 80's or musicals such as Hairspray.
I like to raise money for charity as much as possible usually in the form of sponsored walks and hikes. After losing my Granddad to dementia several years ago I am currently in training for the three peaks challenge in June 2013 for the charity Mind.
I have a range of different hobbies from cooking and baking to the gym and musical but most of all I like to try new things and I am currently learning to modern jive at a Ceroc class ready for the party season and my holiday at the end of the year.
0