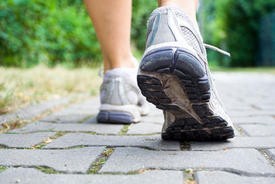 I'm repeating this challenge from last March because understanding how habits work will help you create long lasting habits for yourself. This week, let's explore what habits are, how they are formed, and how we can create new habits or modify our existing habits to make them better work for us.

If you want to change your life, change your habits. Our habits are the invisible forces that shape our lives. In the last 20 years there’s been an explosion in the scientific understanding about habits. We can now tap into this research and use the major findings to build a better life for ourselves.

Of course, there’s no way I can summarize and encapsulate all the fascinating aspects of habits into one weekly challenge. It’s too broad and too deep. My goal this week is to give you enough information and a structure for taking actionable steps to create small habits that will help you reach your goals. There are also lots of suggested resources should you want to explore habits in more detail.


Why Should You Care About Habits?

Charles Duhigg, author of “The Power of Habit”:

“Most of the choices we make each day may feel like the products of well-considered decision making, but they’re not. They’re habits. And though each habit means relatively little on its own, over time, the meals we order, what we say to our kids each night, whether we save or spend, how often we exercise, and the way we organize our thoughts and work routines have enormous impacts on our health, productivity, financial security, and happiness.”


Some Interesting Facts About Habits

1. Habits are essential to our daily lives. Think about all the tiny steps involved in the simple habit of brushing your teeth. If each day you had to relearn this sequence of steps, your brain would get tired and overwhelmed very quickly. The brain’s ability to seamlessly move through a sequence of steps on autopilot is what enables us to go through our day with relative ease. Routine tasks can be automated into habits allowing us to focus on more complex tasks.

2. Roughly half of our daily actions are habits. At some point, we made the decision to do a certain habit, but over time and after repeatedly doing the habit, we don’t consciously make the choice anymore, nor are we even usually aware that we are doing our habit. They run on autopilot, which makes them hard to break. Technically, a habit is something we do automatically without being aware we are doing it. When it’s something we do repeatedly that we are consciously aware we’re doing, that’s a practice or routine, not a habit. Practically speaking, these subtle differences in definition aren’t important.

3. No, it doesn’t take 21 days to form a new habit. How long it takes to build a new habit depends mostly on how complex the habit is and how motivated the person is to create it. A very simple habit can be learned in a few days if a person is very motivated. More complex habits, such as stopping smoking, typically take much longer.

5. Think small and then build. The most successful new habits are those that are incredibly small. Since they don’t require much effort or motivation, our naturally resistant to change brains will be far more receptive to sticking with the new action. If your goal is to exercise 30 minutes a day, start with 2 to 5 minutes of walking or another easy-to-do exercise. Small habits are the foundation of the Tiny Habits program, that many of us will be doing alongside our challenge this week.

Some people have lots of motivation to make changes in their lives and can build habits fairly easily. If you are one of these people, you can likely dive into a 30 minute or longer new habit right away. But if you're not someone with above-average motivation, start a very small habit, get into a routine, and then build from there.

7. Habits are triggered by our environment. What you see, hear, smell, and feel in your home, office, and other environments are powerful cues that trigger the habits you have. Location, time of day, a series of thoughts, and other people can also be triggers. Want to start a new habit? Take a vacation that gets you out of your usual environment.


The Three Components of a Habit (Called the Habit Loop)

The Cue: This is the trigger that starts the habit in motion. There is always a cue, even if it’s subtle and not something we’re aware of. The trigger can be a visual cue or an auditory cue such as the phone ringing. A habit can also be triggered by the time of day, which is why most of us move through the habit of brushing our teeth every morning and night.

The Routine: This is the habit itself, the series of steps you take quickly and effortlessly when you do the habit.

The Reward: In order for us to keep doing the habit, there has to be some reward or benefit that we derive. Sometimes it’s not obvious what we get from doing the habit and it can take some digging to figure it out. But we now know that rewards are a fundamental part of creating and maintaining habits.

Cues and Rewards are Connected

Cues also trigger the brain to remember the reward from doing the habit, setting off a craving for the reward. Even if we are not aware of it, our cravings for rewards drive the habit loop. Yes, donut shops really stack the odds against you.

You Can Visualize the Habit Loop as This: 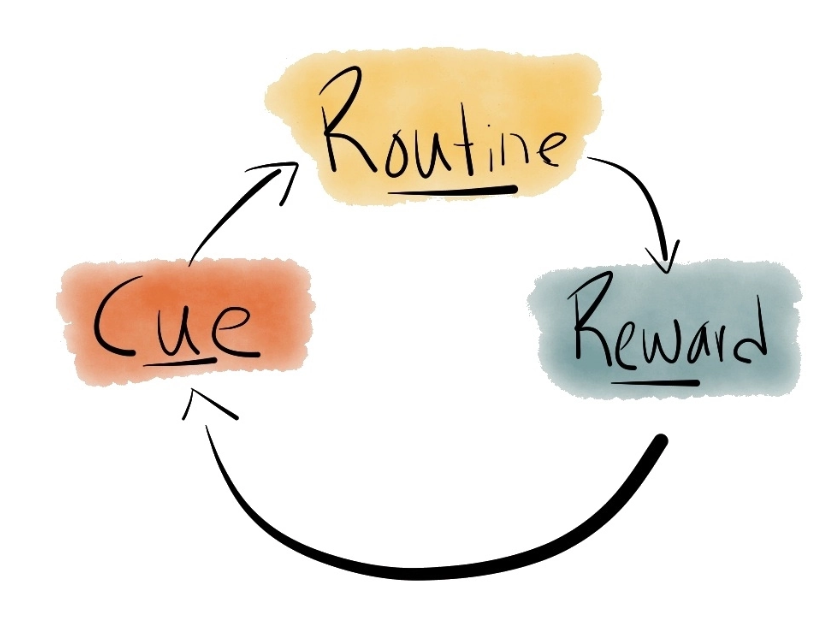 Once you understand the components of every habit, you can start fiddling with and adjusting the three parts to create new habits or modify an existing habit. And that’s our challenge this week!

Several years ago I started the very bad habit of snacking on Cheezits. The cue in this case was the bright red box of Cheezits that sat on top of my refrigerator. The habit was mindlessly gulping down several handfuls of these salty, yummy crackers and not logging it into my food diary. The reward was clearly the taste. Despite seeing the box perched on the refrigerator for many years, I never ate them. It wasn’t a habit. And then for some reason, I started diving into the box with a disturbing regularity and it didn’t take more than a few days to create a new bad habit. I started getting cravings for Cheezits. Food cravings are nothing more than turbo charged habits. Knowing this and understanding the habit loop, the simplest way for me to break my Cheezits habit was to move the visual cue. I took the box off of the refrigerator and put it in the back of a cupboard. When I no longer saw the box every time I walked into the kitchen, it only took a few days for the habit cravings to subside.


The Most Effective Way to Create New Habits

The best way to create a new habit and have it stick is to anchor the new behavior to an existing habit that you already do. That existing habit becomes the cue that triggers you to do the new habit. The anchor needs to be something that you do every day or several times a day. Alternatively, it can be something that happens to you during the day such as the phone ringing or when you’re stopped at a traffic light. Clearly, using traffic cues as anchors can get pretty dicey.

Getting out of bed, brushing your teeth, pouring yourself that first cup of coffee or tea are just a few examples of anchors that make good triggers for new habits. When I did the Tiny Habits program a few weeks ago, I chose the new habit of thinking of something I’m grateful for when I took my first sip of coffee in the morning. I’m still doing that habit.

Practice and Repetition Leads to Success

In order to make your new action a habit, you’re going to have to do it repeatedly until it becomes automatic for you. It’s impossible to make something a habit when you only do it occasionally. Choose a new habit that you can practice daily, or better yet several times a day, and it will be easier to keep doing.

This critical step is the breakdown point for most wannabe habits. People will practice their new habit for awhile and then stop doing it and wonder why the habit didn’t stick. Because it wasn’t truly a habit and wasn’t given enough time, effort, practice, or rewards to become a habit. Whatever small habit(s) you select to work on this week, plan on working on them for several weeks into the foreseeable future, if you want to have them stick. It may not take that long, but it could.

Cues start the habit and rewards keep us wanting to do the habit again. It can be tough to think of an appropriate reward for a new healthy habit, since the rewards tend to accrue years from now. Simple verbal positive reinforcements can be an effective reward. “Way to go, me!” or something similar, may seem a little silly, but it’s an effective response to completing a new action that we want to become a habit.

Rewards are a critical step in habit building because they help your brain decide if a particular series of steps is worth automating into a habit so that it can be recalled in the future.

Want to Change an Existing Habit? Change the Routine

Since all habits have a Cue-Routine-Reward component, a recommended strategy for modifying an existing habit is to keep the same cue and reward but change the routine. Almost any habit can be changed given enough time and focus if the cue and reward stay the same and only the routine is changed.

You’ve Got to Believe that Change is Possible

Belief is also an essential ingredient in habit formation. We have to believe that the rewards from creating new habits will be great enough to be worth taking the time and trouble to create the new habit.

We see this on My Fitness Pal. There are lots of success stories posted on the community forum and seeing our MFP friends succeed at their health and wellness goals makes our own success more real, tangible, and likely. Communities like MFP are terrific incubators for habit change since belief, support, and encouragement make the difficult process of personal change much easier.

Now that you know the components of every habit, choose a very small habit that you’d like to work on this week. What will be your cue? And what will be your routine and your reward?

Alternatively, you might make some changes to an existing habit that you have, that doesn’t work that well for you right now by keeping the same cue and reward, but changing the routine.
Think of something that you do every day or that happens to you every day that you can anchor your new habit to.

And how can you add a Cue and Reward to your "This October I will..." challenge?

If you are signed up to do the Tiny Habits program this week, I suggest focusing only on that this week. Start simple and then build on your success. 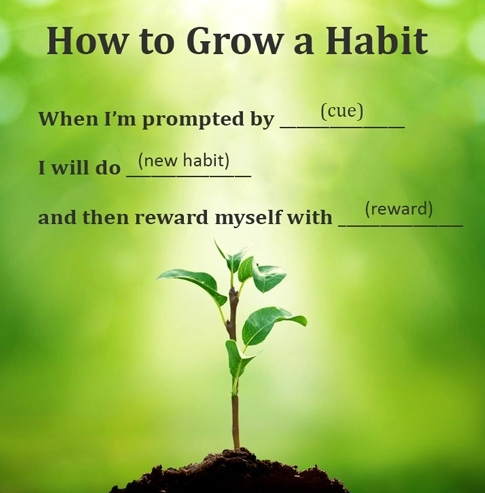 Please tell us what habit you are working on! Make it a great week!

Charles Duhigg, “The Power of Habit: Why We Do What We Do in Life and Business”
http://charlesduhigg.com/the-power-of-habit/

James Clear’s The Habits Guide: How to Build Good Habits and Break Bad Ones
https://jamesclear.com/habits