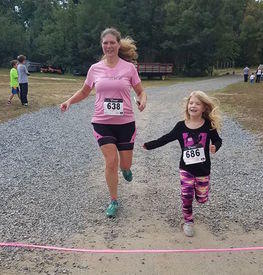 I already know I am going back next year. So here's a recap:

This was my first Oly in my fourth tri year. Also first coed race other than a relay I cycled! I went with three other women from my tri club.

CRAZINESS BEFORE THE RACE: After a full day at the expo, we were headed to dinner and I realized I didn't have my tri bag. !!!! I had half my stuff, but my watch, wetsuit, goggles, and nutrition were all in the tri bag. I thought about spectating; I thought about going home to get it; but ultimately, after a soothing beer and a burger, I decided to hit Dick's and then consider renting a wetsuit. I got TYR Special Ops because I had used them before, and they did not let me down on the swim! That was a relief because I'm pretty picky about goggles. Bought a hilarious headband with camo on one side, it was the only one they had. Raced without a watch. I the morning, the guy selling for blue seventy was SO fantastic. I had to rent a full sleeve wetsuit because they had no sleeveless. I had a full a few years ago and hated it - literally couldn't swim with it. I'm a stronger swimmer now, but also, that blueseventy was light years better than the one I had previously. Orca maybe? I had so much range of motion. Now I get why people go with the sleeves.

SWIM: We did a little warm up swim at the beach - love that they offered that. We got started - I also loved that they had all female waves at the back end of the race. Panicked about 100 yards from the swim start. I stopped and bobbed there looking around for a bit and I couldn't stop thinking that I just wanted to go back and not do this. I said out loud, "I don't think I want to do this!" This woman behind me who was BACKSTROKING said really calmly, "you got this." It was all I need to just get my face in the water and go. I realized I was forgetting to sing to myself, which is my focus technique, and that made all the difference. The swim was gorgeous, perfect temperature, clean, so well marked and supported. Swimming with the current was a lot of fun - glad the part against the current comes first! Long transition, but that was okay with me, gave me a chance to get my equilibrium back. I was extremely pleased with my swim time, thought they lost the timing mat in the storm, based on volunteer time check. I set my expectations very low, at 3:00/100yds, and I beat them by four minutes despite the panic pause. Was not the last one out of the water by far!

BIKE: OMFG. So we did drive the course on Saturday (and freaked out) and I knew what to expect from Glevinso's incredibly helpful Garmin file, which I pored over and compared to my own files from our hills around here. Definitely found that I knew what to expect thanks to that. But, of course, I was at the back of the pack at this point because of the swim, and when I got to the bottom of the steep, long climb, there were five people ahead of me walking their bikes, one of whom was my teammate. It was overwhelming to me to think about navigating around them, and I was not set up well in terms of momentum and gears, and I just threw in the towel. I figured I would be pretty much just as fast walking it as riding it. I passed several of the other people pushing their bikes so I considered that a small win.

There is a final steep push after that to the top of the mountain and I didn't get off for that, though my friend did - I had to pass her which felt awkward, and I yelled out "I'm trying to make this my moral victory." After that, the bike was the most exhilarating, challenging, rewarding thing I have done, short of childbirth. I loved bombing down the crazy, sweeping descents (well, compared to my past experience), and the location was just breathtaking through the whole race. Creek Rd., with those rolling, twisty hills, and the ride along the creek - I just can't say enough about it. I even loved the feeling of pushing so super slowly up the other tough hills the course offered. I consider myself to have a standing date with that hill every year until I conquer it. Hopefully next year! One of my four club members managed it. She and I finished the bike in times that were less than a second of each other, and our run was only 30 seconds different, though she smashed me by 15 minutes in swim and transition time. Given how evenly matched we are, I feel confident that if she did, I can do it too. Having the bike course closed was amazing.

RUN: Beautiful, and most of all, SHADY, course. Loved being back in those woods, and the rolling hills were a lot of fun. I did walk a few hills, and I don't really feel any need to do that differently next year, particularly THE HILL. The support was incredible on all legs - both the aid stations, which were there every time you felt like you needed it, and the volunteers, who must have had amazing training because they were awesome, and the camaraderie on the course - so many men and women yelling support to each other, half and Oly racers alike.

OVERALL: Like I said, no watch, but since I saw this as a first attempt at a lot of things - challenging course, Olympic, coed - and as a training race for my 70.3, I figured I would just see what I could do. Had a hard time setting a goal because I was not sure what to expect from myself and from the course. On the shuttle bus on the way there, I said that my A goal was 3:30, and if I did that I would be REALLY thrilled. I was thinking 50 minutes on the swim, 1:30 on the bike, 1:00 on the run, and :10 in transition. Without a watch, and allowing myself to take it rally easy on the bike climbs and to walk a bit of the run, I hit about... :44 swim, 1:34 bike, :58 run, and :12 in transition. Total of 3:29!!!!! That was a real confidence builder. I have an A goal of 7:00:00 for my 70.3 in Atlantic City, which should be a much easier course (short of potentially brutal sun), after five more weeks of training, so I'm feeling cautiously optimistic.

This race was just so incredibly well executed and it was breathtakingly gorgeous throughout almost every minute. I cannot recommend it highly enough. There is also a ton of great accommodations nearby, not only in the inn where it is held but in a number of townhouses and condos within a mile. We stayed about a mile away and it was so convenient. No traffic issues. And if you wanted to extend the trip the resorts all have tons of recreation options.
0