How many calories are really burned? 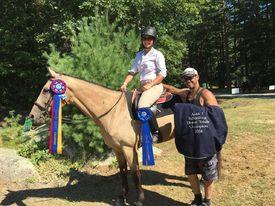 MissMissle Posts: 293 Member
May 2014 in Social Groups
So I know I can't get an answer unless I buy a FitBit or something and actually figure it out on my own....but I always just do MFP generic input for horse back riding - and I round about how many minutes I rode for and it gives me a number... but obviously you burn more jumping, or posting no stirrups, then you do just walking around. PLUS, Im a huge believer that once you do something for a while - you can work a percentage as hard to get the same results... IE I let a friend of my mom's hop on a school horse a while back. Shes a body pump instructor from Russia - very fit, very active. Just trying to stear the horse to the track in the ring was a workout for her - she was completely flustered in a matter of seconds just trying to maintain balance, stear, and not fall off. She said that it was by far, way harder than body pump or any other aerobic class she ever taught. And i think she came to this conclusion in less than 5 minutes of strugling.

Now, if I jump rope 5 times I get winded, never mind doing an actual aerobics class - but I can do a ten mile hunter pace in my half seat noooo problem.

My point is...she burned more calories than me Im sure, because I find ways to make it easy.... well, as easy as I can. I compromise what i ask my horse do do without even realizing it.... plus, I have the muscle memory.

So what do I burn? I generally brush my horse for bout 15 minutes then do about a 60 minute ride - about ten or so minutes is walking, the rest is trotting and cantering, and I barely ever drop my stirrups. I jump only about once a week. Then when I'm done I'm brushing of bathing her for another 20 minutes, then cleaning my tack for about ten minutes or so...

I don't count the walking time so i usually say I ride for about 45 minutes and am generally given an estimate of about 218 calories - but what does that mean? Has anyone actually used a FitBit or something to see how many calories they are actually burning??
0