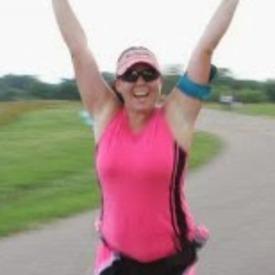 rduhlir Posts: 3,582 Member
September 2013 in Social Groups
I know we have the graduation thread and stuff, but we lack the success stories. Sometimes the push we need are seeing t he accomplishments that others have done. I know I did....

My success story actually started in October of last year. Some of you know that I am in the military, and for those of you who don't...well now you do :laugh: Last October I was on the verge of being kicked out, I failed my weigh ins. Like others who have failed the weigh ins, I saw and knew I was getting heavier and heavier, but did nothing about it. I didn't honestly think that I would fail weigh ins. But I did. I was 29 years old, eating like I was 16 and not lifting a leg to do one ounce of fitness. I know some of you are like, "But you are military, you do the PT test." Well, actually, the Coast Guard (as of right now at least) since it is not a battle oriented service, the PT test is only a requirement for certain jobs. I don't have one of those jobs. My job is sitting on my butt for 12 hours a day near a radio.

Anyway, so October came, and I failed weigh ins. And believe me I did everything to try and drop 8 pounds by the end of the month. I sat in a SUPER hot tub with epsom salt (don't recommend this), tried a cleanse, and even tried to starve my body for the last 2 weeks. Novemeber I was so depressed that I failed the weigh ins that I ended up hitting my all time highest weight of 174. I was depressed and on the verge of losing my military career.

December I had had enough and went to the military branch clinic here and got some Chantix. Took it, and then on December 20th I had my last smoke. I knew I was going to have to replace one addiction with another, and it couldn't be food. So...I started P90X. I was going strong, doing the P90X program, I was on here tracking, life was good.

You know how they say, "Register for a 5K and it will help focus you to complete C25K", that isn't always the case. I will let you all in on a secret, I registered for a 5K last year and didn't do it. Why? Because I was so lazy I didn't care. That failure is what pushed me to do C25K. I remember that feeling too, the feeling when I realized that I not only wasted money, but of what I was becoming and it scared me. I then saw something somewhere (forgive me but I can't remember where) about healthy birthday gifts to yourself, and saw the 5K thing. Well, I looked around and behold there was one on my birthday.

So...January 1st I started my running career. I started it alongside New Rule of Lifting for Women, but found that the running and the lifting were taking up too much of my time, so I shifted to a much easier lifting program. On March 23, 2013 I ran my first 5K and finished with a time of 33:42. I honestly thought I was going to finish much slower than that, so I was suprised when I did so well. My birthday present was one of the better I received. Here is a pic from that day:

Now, flash forward 6 months later and my first half marathon is next month. It is hard to believe that a year ago I was failing my weigh ins and sitting my lazy bum doing nothing. While I know I will probably never be the fastest runner out there, I will still rank high in the ranks of will. For with will power you can do anything you can think of, you just have to find the courage to start.