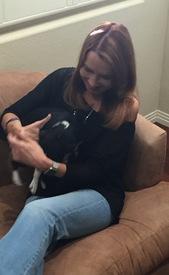 Nevadaden Member, Premium Posts: 938 Member Member, Premium Posts: 938 Member
in Social Groups
A few years ago, I saw a photo of myself that caused me to grimace. Yes, I know the camera adds ten pounds (cue the Friends joke about how many cameras were on me), but it was disheartening. I knew if I didn't do something, I would keep gaining. I wasn't looking forward to another round of calorie counting, and although I had had some limited success with a previous version of Weight Watchers, I disliked the latest iteration that seemed determined to push you into eating what WW deemed "good" for you rather than what you enjoyed.

What's more, the whole three meals plus two snacks didn't work at all for me. Once you've divided 1200 calories into three meals, let alone three meals and a couple of snacks, you face the prospect of a dinner that consists of three ounces of lean protein and a few undressed vegetables with a piece of fruit for dessert, while your dining companion (in my case, a 6'4" triathlete) consumes a hearty bacon cheeseburger with fries and a piece of cake for dessert. And, finally, I knew that when I ate early in the day, the rest of the day was a constant struggle. I felt deprived from the second I ate breakfast.

Which led me, naturally, to not eating breakfast. I had never been much of a breakfast eater, even as a child, so giving up the so-called most important meal of the day was no sacrifice. And it meant that the previous pitiful calories allotted to breakfast could be split between lunch and dinner to make those two meals more satisfying.

I researched various forms of Intermittent Fasting, including LeanGains, EatStopEat, and the Warrior Diet. I found I liked Fast Five particularly well. But eventually I pushed the lunch hour out and finally landed on one plentiful meal a day Monday through Friday. On the weekends, when I rode my bike, I would add in the exercise calories to allow for a longer eating window that included pre-dinner appetizers.

Over the course of about 6 months, I lost 27 pounds. It wasn't as fast as some but it was steady and, most wonderfully, painless. Along the way I joined this community and was happy to cheer on such friends as Kitty Gonzalez (whatever happened to Kitty?), @blambo61, @Brendalea69 and @LadyBlanks (although you both went by different names then), @brittdee88 and @wsandy8512, among others. I haven't written much on this forum for a long while, but I've been keeping track of newer members' progress and silently cheering you all on.

I kept that 27 pounds off for about two years, with little effort, until a stressful work life got in the way, and my habits slipped. I was still ostensibly doing intermittent fasting, but the eating window was longer and the plates were much larger. I thought I had regained 8 pounds, but this morning's reality check revealed it to be 10.

@LadyBlanks has inspired me with her Hawaii challenge. In 45 days, I head to Europe for a two-week bike riding trip. I know I'll enjoy it much more with those 10 pounds gone...and just generally, I feel better when I'm intermittent fasting. So, Tracey, thank you for the inspirational kick in the kitten. I'm in.

I started yesterday with one meal, but since that meal followed several days of undiscipline, I'm calling today my official beginning.

I've begun the day with black coffee. Generally speaking, I don't like black coffee; I prefer it with heavy cream. When I originally lost 27 pounds, I did so enjoying heavy cream in my coffee. However, I've discovered a coffee that I like well enough black -- it has cinnamon and turmeric in it and isn't harsh. Thus, why not? I may still have coffee with cream on the weekends, but as long as this coffee with cinnamon and turmeric is tasty enough, I'll drink it black during the weekdays.

Losing 10 pounds isn't the only goal I have -- I need to get my legs in pedaling shape. Two years and ten pounds ago, I cycled through Tuscany for two weeks. I ate what I wanted (and I apparently wanted lots of pasta, cheese, and good Tuscan wine), although I still limited breakfast to coffee. Between the bike riding and the breakfast-skipping, I didn't gain an ounce But I was lighter and fitter then. I'm going to aim for some combination of two outdoor bike rides and two indoor ones per week, depending on weather. I've got six and a half weeks, but I'll round down so as not to discourage myself, which brings me to....