How Much Self-control is Enough to Succeed? 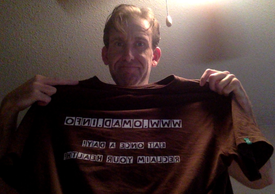 Mom and little one and I were out at Ingram Park Mall yesterday. After getting mom's phone fixed at the Apple store, we stopped to eat at a quaint little Chinese joint in the food court. That was great for them, but it wasn't my meal time. And as much experience as I have had missing meals just sitting right next to delicious food and family/friends chowing down on it, I'll admit this was a bit tough.

Now I could have rationalized in that situation in that I'm massing up and working to put muscle weight back on, but there is still such a thing as eating too much, even in the upper ranges of gaining weight, which is why the best way to keep everything in perspective for me is to remain on OMAD as I see it.

That said, it wasn't my meal time, and I really wanted to eat! But I only had five hours to go until the window opened. That didn't matter. The eating window wasn't open, so that means no eating! When you can sit down right next to some of the most alluring, calorie-dense food on the planet (Chinese food always falls into this category), and even when you're hungry, put it off until later, you know you've got what it takes to make it!

For the OMADer, there is a time to eat and time(s) not to eat, period. Sometimes this is easy and sometimes this is hard. Even when you are in a position to justify doing your own thing, you remind yourself that long-term success is defined by a solid, dependable (read: sustainable) regimen, not by following cravings. It is the chaotic instability in "trying" new eating routines and playing around with off-and-on crash diets that virtually guarantee weight loss failure.

My solution (pictured) is going back in line and scoring me a Diet Coke and a 2 + 1 General Tso's / Orange chicken combo, with yummy noodles and fried rice...for later! Yep, that was my meal - together with two granola bars and a cup of ice cream - when the window opened later in the day. At the time, that Diet Coke was good enough.

You feel better when you stick to your plan than when you break down and splurge (read: lose control) by eating out of step, and it's a much better good than the so-called "good" that comes from feeling full...a feeling that can be ruined by feelings of regret.
6