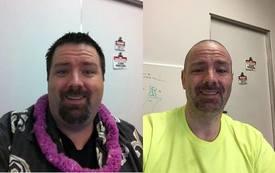 Jerrypeoples Posts: 1,541 Member
June 2014 in Success Stories
Right now my arbitrary number i picked to get to weight wise is 212 (literally just picked that as a number with no rhyme or reason) I think ultimately i would like to get to just below 200.

I cut out fast food for the last two years and during the week i keep to just between 1500-1900 as a goal calorie wise. for a solid 10-11months i had been stuck at just around 230 but have just recently broken that barrier. I dont want to say i was frustrated with the stalemate because if i did let myself get frustrated i probably would have went back to eating junk again as a coping mechnism. I just stayed the course and let the chips fall where they may. Sometimes i went above 2000 (tried using the TDEE method but after 4 weeks only put on weight).

My workout regimen is 1 day weights+ cardio then 1 day cardio. During the school year I play basketball 2 nights a week. I use MFP and Fitbit to keep my stats in the ballpark and then import that info into a spreadsheet to try to discern trends. Using fitbit i burn an average of about 3240 cals a day and with MFP i eat around 1700 (both of those are averages)