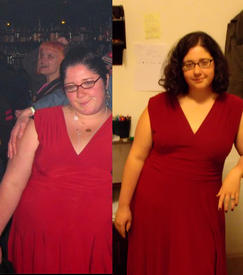 xenu01 Posts: 117 Member
July 2014 in Success Stories
I know that most of the posts here are for HUGE milestones, but I wanted to post anyway. At 30 years old, I have been running regularly for 1.5 years. Only, the way I've been doing it is that I've been running intervals for the past 18 months. I've been working on cutting my walking distances shorter, and recently my husband, who I run with, pointed out that I'm running much faster these days.

And yet, I was so frustrated, because I STILL couldn't go the whole mile around! Then I saw a forum post on MFP where a member was asking for tips around running a faster mile, and it hit me. WHAM. All of that stuff that people say about wanting to run an _ minute mile means that everyone runs at their own pace!

This was world changing for me. Last week, I was able to run a whole lap by concentrating on my breathing and going quite slowly. And today! Today I ran my first continuous mile. EVER.

I've never run a mile before! Not even in PE in K-12. I would "run" a 20 minute mile via intervals. I don't think I've ever even run around the whole track before last week! But I just ran a mile.