MyFitnessPal may have saved my life by helping me lose more than 60 pounds. 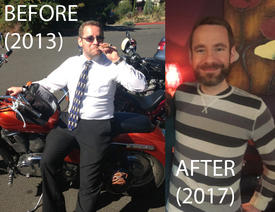 irxproductions Posts: 28 Member
May 2017 edited May 2017 in Success Stories
I’ve been meaning to send an email to the MyFitnessPal team for some time, and since yesterday was my three-year anniversary of using the app, I figured this morning would be as good a time as any to post my story.

In November 2013, my doctor warned me that I had metabolic syndrome - I was high risk for developing diabetes - during an annual physical. I was 37 years old, 5-foot 9-inches tall, and weighed about 205 pounds. I never felt like I was obese, and since I worked out 7 days a week (since I was 28 years old), I always figured I was healthy.

Even my doctor didn't know what I could do to get out of the situation. Since I worked out regularly, the only suggestion he could come up with was to lose weight - a LOT of weight.

I left my doctor's appointment feeling dejected, frustrated, and generally angry at the world. I worked out seven days a week! What else was I supposed to do?! Shouldn't that amount of exercise entitle me to eat whatever I wanted?

Over the next six months, I was able to lose about 10 pounds on my own, cutting back on food here and there, but the process was incredibly challenging and I didn't feel like I was making much progress.

In May 2014, my wife found the MyFitnessPal app and started using it. "What a joke," I thought. "How could this do anything to help people? It's just a gimmick." Regardless, I'm a big tech geek, so I started using the app.

By my next physical in November 2014, I had lost about 50 pounds. All of my numbers were healthy. I was no longer a candidate for diabetes and didn’t have metabolic syndrome.

I didn't change what foods I eat. I didn't change my exercise routine. I simply started tracking my calories using MFP and changed HOW MUCH of the foods I love I ate. I was determined not to change my diet because I knew doing that typically doesn’t stick. Too many people try new-fangled diets, lose weight, but then turn around and gain it all back because they get tired of the diet and go back to their old ways.

What I learned from using MFP was shocking in some cases. I had NO IDEA how many calories were in some of the foods I loved, and I also had no clue how much I was SUPPOSED to be eating in a day and how much I was OVEREATING. Before MyFitnessPal, I often ate more than TWICE as many calories as I actually needed each day.

Yesterday was my 3-year anniversary of using MyFitnessPal. As of this morning, I weigh less than 145 pounds - a total weight loss of 60 pounds or nearly 30% of my body mass back in November 2013. I am no longer pre-diabetic and I am in the best shape of my entire life. I even have a six-pack (kind of), well-developed muscle mass (with a body-fat percentage of less than 9%), and run 5Ks three times a week, every week... something I never thought I'd be able to do.

My 40th birthday is next week, and I recently went to a wedding in another town where I used to live. My old friends can't believe the change. I look better and feel better than I ever have in my entire life. My friends and family honestly can't believe it, especially when I tell them I didn't change my diet.

I lost more than 60 pounds and kept it off, and it's because MyFitnessPal changed my entire paradigm. Thanks to the app, I completely transformed my entire perspective toward food and eating. I still eat whatever foods I want; I just make sure I watch my portions and ensure I don't eat badly all the time.

I am a true MyFitnessPal convert. I've used the app for more than 3 years and have never missed a day logging my exercise and calories.

So, this is just my long way of saying thank you to the entire MyFitnessPal team. The app is fantastic. The team's work changes lives. And, I'm not kidding, MyFitnessPal may have saved my life.

Thank you from the bottom of my heart.

- A MyFitnessPal user for life
34