Straight from the nutritionists mouth 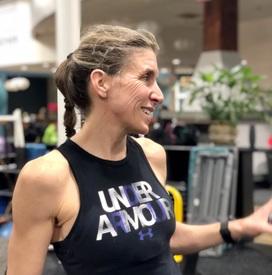 HilTri Posts: 378 Member
March 2018 in Health and Weight Loss
I have tracked for a long time (years) and have been an avid exerciser for longer than that. I have only posted a couple times but wanted to share some things that were just revealed to me at my appointment with a nutritionist! I am a 48 year old female, 5'6" 136 lbs. I run and lift and am pretty active when I am not working out. Last summer I weighed 131. I was very happy with the way I looked but haven't been able to get back there without starving so I started to assume that there must be something I was overlooking so I went to a nutritionist. He looked at my diet and said he wouldn't hanger a thing unless he was being really picky and he would tell me to eat a bit more fruit. We figured out a proper number of calories for me to consume which was on par w MFP, 1500. I was perplexed! He said he was referring me to a a sports physiologist. I was really surprised but he said that he would imagine that the reason for my plateau ( and slow gain) could be due to the fact that I have been my same weight routine and running the same distance for too long and that I need to switch it all up. That appointment is in two weeks.

He said that I should not eat back my exercise burned calories. 1500 on off days and on days. I asked if I was drinking enough water (40-60 oz). He said that no formula was required to determine water intake but to simply make sure my urine was clear or just a bit yellow. I asked about a protein heavy diet and in fact he said not to eat too much (75-80 g). He said I could drink all the Diet Coke I wanted within reason ( a liter, at know, I know).

Finally after thinking that I accurately tracked my caloric intake, I decided to write down every single calorie that crossed my lips. I have been always been mindful of food, healthy at that, but I never bothered to track coffee. I figured that the little amount of milk I put in it was no biggie. Well I measured it....I drink 1 cup of milk with every cup of coffee! I drink 3 coffees per day, 3 cups of 1% milk per day at 100 calories that I was not accounting for!!! I guess I am never to old to learn or relearn! So....eating a firm 1500 cal per day and not blowing 300 on milk and I feel better already and I haven't even switched up my workouts yet.

The info I got from the nutritionist granted was geared towards me but I thought it was helpful so I wanted to share it. I think I want to go back to school for this, it is so amazing to me how what we put in our bodies effects us. I am marching my way off my plateau and although the solution is simple, it wasn't obvious to me.