Never lift weights over your head! 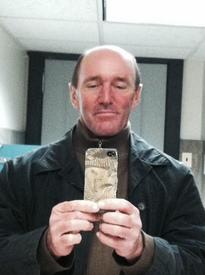 GiddyupTim Member Posts: 2,818 Member Member Posts: 2,818 Member
in Fitness and Exercise
I play tennis with a guy who says that his doctor, and his sister who is a physical therapist, tell him that one should never do weight training where you lift the weight above your head. They say the shoulder isn't built for that and it is a recipe for disaster!
I am a bit skeptical.
I am of the belief that medical professionals get somewhat skewed ideas about the safety of certain activities because they only see people who are injured. That is, they see two violinists with carpal tunnel (or TMJ or whatever) they come to the conclusion that violin is extremely dangerous, since they have never seen a tuba player with it and they have never had a violinist make an appointment to come in because their wrist is fine.
Anyway, point is, does anyone know of any objective evidence that supports this shoulder advice?
Do weight lifters injure their shoulders at a high rate when they do push presses? Or handstand push-ups? Or snatches?
Is there any evidence that the kind of shoulder injuries you get lifting are likely to create chronic shoulder problems?
The only true objective information that I can find on this says:
1) Weight lifters do get injured; it is a physical activity, after all. But the rate of injury in weight lifting -- both Olympic lifting and powerlifting -- is less than track and field, less than any contact sport. A violent activity, such as throwing is more likely to cause serious, permanent damage to a shoulder, knee, whatever, than pushing a heavy object.
2) A few retrospective studies -- studies where they ask participants to recall their injury history -- suggest that weight lifters most frequently hurt their shoulders, lower back and knees when they get hurt. One study found that powerlifters more frequently hurt their shoulders than their lower back or knees, but that was not the case with Olympic lifters, which seems counter-intuitive if lifting overhead is a problem, since Olympic lifters do nothing but lift over their head. (https://bjsm.bmj.com/content/51/4/211)
3) Only one study I can find compared shoulders in lifters and non-lifters. This study found that recreational weight lifters did indeed have more shoulder injury and pain than non-lifters, but that is a little bit unimpressive because, of course, if you use your shoulder a lot in a demanding activity you are more likely to get a shoulder injury than someone who does not. Of note, this study found that there were two particular lifts that appeared to be associated with shoulder pain and shoulder impingement: upright rows and lateral deltoid raises. Without those, the rate of injury/pain wasn't much different. In addition, one type of exercise was associated with less injury, external rotator strengthening. (https://www.ncbi.nlm.nih.gov/pubmed/24077379)
Can anyone tell me, am I missing something here? Is there a huge database that says that Olympic lifters end up trashing their shoulders after 5-10 years? Or something like that?
December 3, 2018 9:29PM
2
«12»