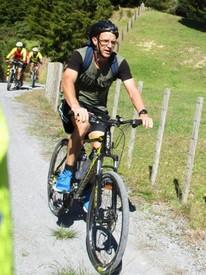 bjdw_1977 Posts: 438 Member
April 2019 in Fitness and Exercise
What if, when I'm on crutches for three months after surgery, I take the left pedal off my bike, clip in with my right foot and do my five rides a week on the indoor trainer pedaling with only my right leg?

At least my right leg won't atrophy and I'll keep my cardio up to scratch. I'll just be doing wheelies when I finally get back on the road.
0