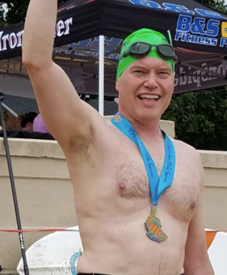 Jthanmyfitnesspal Posts: 3,242 Member
June 2022 edited June 2022 in Fitness and Exercise
I had a harder time working out this spring due to COVID in April and a big move in May. I gained a little weight, too. Now the weather is warming up a but (still only in the low 80s), and running/cycling workouts are kicking my *kitten*. Plus, I'm trying to cut the pounds, which also makes my normal workouts a little bit harder. In general, I'm struggling, but not giving up.

(My swim workouts are about the same, however. Gotta love that water on a hot day.

I know that I need to hydrate regularly before 1hr workouts, but it can be hard. I find I like to chug up to 16oz right before I go so it's more likely to come out the pores than via the bladder-- ideally with electrolyte drink. Also, it can help to eat a banana or something. It takes just a little planning and I haven't been getting it right lately.