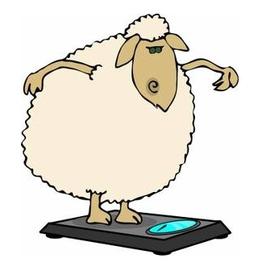 I found a recipe I liked for Chicken Enchiladas, and then I started making low-fat, low-cal substitutions until it got to within my goal calories per serving. I made them last night and my son and his friend had NO idea I used fat-free ingredients and even got seconds. I like this recipe because its actually quite a lot of food. I set the servings at 2 enchiladas, but I was full after one and saved the second one for later. If you're a big eater, leave it at two. If you pick like a bird, change the serving to one enchilada.

Directions
1. Preheat oven to 425 degrees. Spray a 9x13 inch baking pan with cooking spray; set aside.
2. Mix the chicken together with the fat-free cheddar in a bowl. Distribute the chicken and cheese mixture evenly among the tortillas. Roll up and place seam side down in the prepared pan.
3. In a large saucepan, melt the butter. Add the flour; cook and stir for 1 minute. Add the chicken broth, whisking until smooth. Continue cooking over medium heat until sauce is thick and bubbly. Remove from heat.
4. Stir in the sour cream and Rotel. Pour the sauce in an even layer over the enchiladas. Sprinkle with Mexican cheese. Bake for 20 to 25 minutes or until golden and bubbly. Sprinkle with cilantro just before serving.

Note: I make and preserve my own stocks and broths, so the recipe will be even less calories if you get the fat-free chicken broth at the store. You can also reduce the calories even further by using corn tortillas instead of flour ... but I find corn tortillas rip too easy when I try to pull and roll them tight, and I was able to get this meal low-cal enough without having to do that.