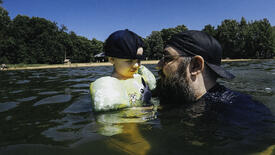 Archercc Posts: 37 Member
July 2016 in Health and Weight Loss
Has anyone else had a hard/impossible time keeping their diet/count when their sleep schedule gets messed up? Due to stress and an up coming vacation my sleep pattern is wrecked (3 hours at night, 3 in the afternoon right now) it's been this way for about a week now, and nearly every day I have been on the line or over with my count. Granted right now going over won't kill my diet (set at dropping 2 pounds a week) but I feel (mentally) terrible about going over.
0