Is commuting by bike worse for climate change than driving a small car? 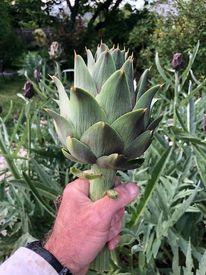 Working from home half time or more, I got out of the routine habit of commuting by bike. I'm starting again. Biking is fun, contributes to fitness, and can reduce emission of greenhouse gasses compared to driving a car. Or maybe it doesn't always do the last one.

I remember reading years ago that commuting by bike isn't always as ecologically beneficial as we might think. The article was about a study that showed a cyclist who ate meat would contribute more greenhouse gasses to the atmosphere than a driver of an efficient automobile. It had to do with the extra calories needed to fuel your body for the commute and the high carbon price of beef. Of course you get a personal health benefit by getting your body moving, and the great thing is you can choose what foods to add to your menu to fuel that commute. A quick consultation with the Oracle of Google shows that this information is still relevant, for example:

https://www.bicycling.com/news/a32936547/low-carbon-diet-study/ is from a bicycling community. One interesting thing it mentions is that for SHORT trips where your car is not running as efficiently as when it's fully warmed up, your pedal-powered commute produces less CO2. So maybe cutting out those shortest trips is the MOST important.

https://vancouversun.com/news/local-news/are-meat-eating-cyclists-worse-for-the-planet-than-drivers provides some estimates of how many emissions are created from various vehicles.