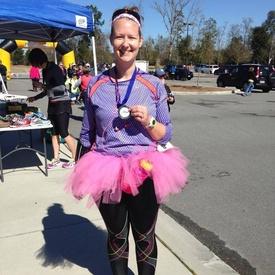 madmiss Posts: 219 Member
September 2013 in Fitness and Exercise
So in 19 days I will be running my very first 5K! Does anyone have any advice? I’ve been doing the couch to 5K program the last 8 weeks and will “graduate” the week before the big day! But for some reason I am terrified I will be the last person to come across the finish line, even though 8 weeks ago I could barely run for 60 seconds… So I will be so proud of myself no matter what – and there will be NO walking on my part…

I am so nervous, this is silly! (Note, I also plan on wearing a pink tutu so incase I do come in last at least I will do it with style!!!!) Just wondering about other people’s first experiences?
0