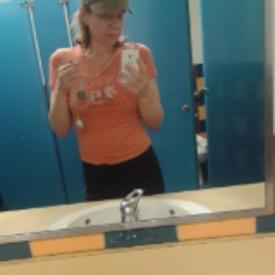 lilbearzmom Posts: 600 Member
April 2014 in Fitness and Exercise
I had the most ridiculous conversation with my husband last night in regards to exercise/fitness. He is "interested" in starting a routine at the gym, but is making a ridiculous excuse to NOT get started.

A little backstory: We work opposite schedules- he works M-F 8-5 and I work 12 hour nights 7p-7a various nights per week. My schedule right now mainly consists of working one week 6 out of 7 days then having a week off. I make time in this for exercise, but during my work weeks, I go to the gym 3 times per week, on my off weeks 5-6 times per week. In other words, it's not all that consistent, but I go when I can and try make sure I do my lifting consistently. He wants to go to the gym with me after he gets off work but we have a special needs child who cannot be left unattended. My solution was for him to go by himself....get ready for this....

He says that unless he has a strict schedule, like say, every MWF there's no point and that unless it's consistent like that, there's no benefits. He actually said "ask any fitness expert, if you do that it's like going backward." I wanted to laugh in his face but didn't- I just shut up because there is no way to respond to something so ignorant.

BTW, his plan does not involve weights, just, in his words, "power walking".

So by his logic, fitting it in when you can has as many benefits as not doing it at all.