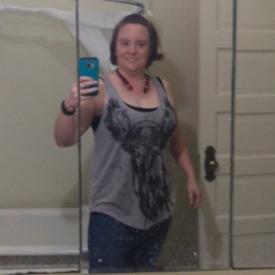 firephoenix8 Posts: 103 Member
April 2016 in Health and Weight Loss
I'm not sure how to take this. I weigh myself most days when I get up in the morning (sometimes I forget). I'm prone to variations of 1-1.5 lbs from one day to the next, so that doesn't worry me. I've been plateaued for about a month, mostly because it's the end of the school semester so I'm stressed and I've been feeling hungry so a lot of days I've been eating at maintenance. I haven't worried about that either, figuring I would have the mental energy to focus on it after the rash of projects are over this week (forget finals, it's the end of semester projects that suck).

So I ate fairly normally, over on calories and not as much protein or vegetables I should've, yesterday. I didn't exercise because I spent the whole day reading for school. I expected to be up a few ounces, actually. Instead, I'm down 4 lbs. I moved the scale around, walked away and came back 20 minutes later, ate a protein bar (breakfast)...no dice. The scale insists I'm down 4 lbs from yesterday, 3 lbs down after breakfast. Yesterday's weight is what I've been at for 2 weeks, so it's not like yesterday was a fluke.

Should I change the batteries in the scale, or just wait for tomorrow, or is it really possible?
0