Bailey gives thumbs up to 4 day bike in row day 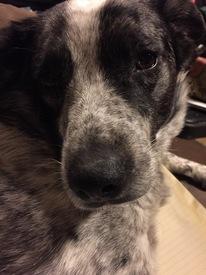 P13C35 Member Posts: 38 Member Member Posts: 38 Member
in Getting Started
My pup, is a special one. She was neglected I stole her and her sister. Got them microchipped under my name before I took them; took both on walks every week or so. Got them microchipped on a "walk". My pup was declared "dangerous animal" by the city and to "be disposed of". We won the first city appeal to remove status for Bailey. Everyone says they've never seen such a committed to one dog ever like we have. It was her, not me, that decided she really diggged me. I stayed detached and focused on commands and behavioral problems. She's a Blue heeler, extremely protective of the family. She chose me as family. She lunged at someone on a walk and faced a death sentence because if it.
In a peaceful hike of ours, I asked her why she chose me. I was unable to find why. I heard her say "I wont leave you either" it was a bit light headed in the hike and im a smoker so who knows but it satisfied my curiosity.
We have been biking daily since last week in may. For the last 4 weeks Ive taken her 3 times a week about. Now it would have been 5 days if not fir heavy storm.
She just wanted to post she's glad the morning bike schedule is back and wants to thank all the folks that Ive connected with and their support. She says she dowsnt have to look over me as much. She says fast and free, and she wants to keep going!!
September 17, 2016 8:39PM
2
«12»