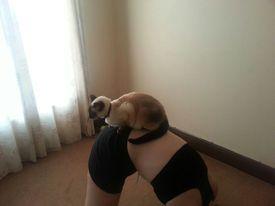 Mistraal1981 Posts: 453 Member
July 2018 in Health and Weight Loss
A place opened up selling hand made brownies. I was so excited! I have a crazy sweet tooth. Planned my weekly calories around trying them. Got them today and they are....Ok.

I am sad I wasted calories on them. I have become really fussy about what I spend calories on and will gladly pay a premium for quality.