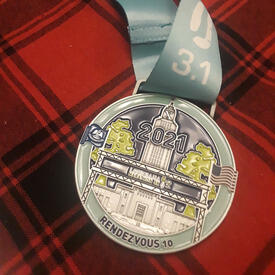 Yay! Although it's not a huge difference like some transformation stories I can tell a tiny difference. It's been a crazy year with 3 weddings, my father-in-law's illness and funeral plus a few other friends funerals and my son's upcoming wedding. Definitely a rollercoaster ride of emotions. So this year gym has been more for my sanity than weight loss.

The 2nd pic is just for giggles. I think that might be a teeny tiny muscle forming. I am just thrilled to be able to do a Burpee, an assisted pull up and to have a routine on the "big boy" side of the gym (aka free weights)

Anyway just wanted to share and hopefully inspire someone else to come along on the journey. It's so worth it.

And if you're on your journey and bummed out by the number on the scale take a picture. It really is eye opening.