Losing Weight, Gaining Muscle...Scale is dropping, pants are getting tighter...help! 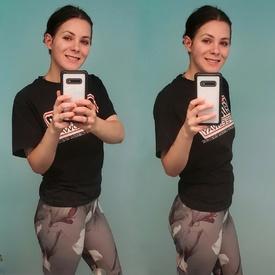 brittanystebbins95 Posts: 559 Member
January 13 edited January 13 in Health and Weight Loss
Okay, this may be a bit long winded, so for those of you that read the entire thing, thank you.
My son is 16 months old. Before I had him, and throughout my pregnancy, I was in really good shape. I was going to the gym almost every day and lifting heavy (not so heavy towards the end of pregnancy), and running a few miles 2-3 times per week. I was about 150 lbs.
Then I got SPD and could hardly walk, and that took months after having my baby to really go away. After that, I never really got back into the swing of things.
I've been going consistently again, and I'm going up weight pretty quickly, as far as lifting goes. I've been eating in a calorie deficit most days and being consistent with it, so I was expecting to have seen some progress by now. Especially since I was under the impression that its difficult to gain muscle and lose fat at the same time.
So anyway, that brings me to my dilemma. The number on the scale is dropping. I’m about 173 right now, and started around 175. The goal is to get back to 150.
As the scale drops, I would have thought my pants would be getting looser. However, they are getting tighter. Much tighter. It’s only been two weeks, and they are so tight around the front of my upper thighs and my butt that they hurt, and they actually are cutting off circulation so badly when I sit down that my legs and feet are falling asleep.
I don’t know what to do. I was so excited to fit back into my old clothes. I am so frugal, I CAN buy bigger pants but I’m so bitter that they’re going to be bigger and then I’m going to shrink again makes me loathe the idea entirely. I don’t want to spend $80+ on a pair of tactical pants that I’m only going to wear for a month.
Has anyone gone through this? How long is the adjustment period, before my body starts getting smaller as I lose fat and gain muscle?

Edited to add that the pants I am trying to fit back into... are the same pants that I wore before I had my son, when I had a LOT of muscle compared to now. So they should fit eventually, right?