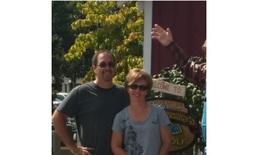 But I wanted to illustrate something. This morning, when I weighed myself at the time that is the most popularly suggested, I came in at 215.4. This afternoon I weighed in at 212.0....twice.

My last recorded weigh-in a few days ago was 213. So, did I gain 2.4 pounds? Technically yes. Well, probably not exactly because I'm sure the scale is not really accurate to the tenth of a pound. Did I actually lose 3.4 pounds after my weigh in? Again, technically yes. But the real question is: how much fat did I lose (or gain)? And the real answer is: I. don't. know. And more specifically I can't know in the short term. All I have to really know is what happens in the long term.

I have gotten on my soapbox about fluid retention a lot in my limited time here. And one of the things that I consistently bring up is that your weight can vary in one day by more than double the amount you want to lose in a week. As I've learned since I've been here, there are usually several new threads every day with folks saying they are doing everything right and not losing weight.

I'm sure some really are doing everything right, but whether they are or not, how would they know without giving the process enough time? (On a separate note, given that, my own controversial opinion is that it doesn't matter long term one iota of when you weigh yourself because there are simply way too many variables that change at different rates for there to be any "consistency" to the weighing process - it's all in trend over time. If you want to debate that, it's probably better for another thread).

Time and trend is all that matters. Don't let the short-term scale reading fool you. Use those readings for data, and give yourself enough time so that you can make your decisions based on good data, not on short term feelings. You can't know in a couple of weeks whether what you are doing is working or not. Trust the process and log as accurately as you can. And then trust the many experts in here - except for those that talk about starvation mode. First, that's not a thing, and second, adaptive thermogenesis, which is a thing, wouldn't show up in a few weeks either.
April 19, 2017 10:33PM
4