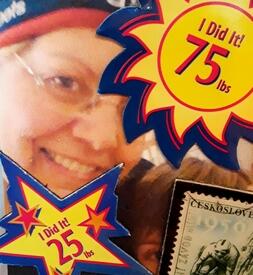 Mofee1 Member Posts: 6 Member Member Posts: 6 Member
in Motivation and Support
Hey all. My first time posting in this forum. I'm so frustrated with my weight loss journey. I have been using myfitnesspal off and on since around 2005. I initially followed Weight Watchers plan in 2004 and lost 60 lbs, but after hitting a major plateau then, I quit and started using myfitnesspal. Counting calories worked better and I lost another 40 lbs. I have kept it all off since then. So that's a total of 100 lbs lost and keeping it off for 17 years! I feel good about that, but, I want to lose ANOTHER 40 lbs. to reach my ideal weight and it is much harder now, especially since my fibromyalgia nerve pain makes it feel impossible to exercise. Anyway, long story short, I am re-committed to losing the rest of my excess weight and started tracking calories using myfitnesspal on Februay 25. I have lost 14 more lbs., but have stalled completely in the last three weeks. In fact, a couple of weeks ago I GAINED two lbs. even though I never strayed from my calorie limit--not once!!! Talk about demoralizing. Ugh! Yet, I remain completely committed and still have not strayed from my calorie limit and calorie tracking. I am limiting myself to only 1200 calories a day which isn't much, believe you me. I've been thinking about reducing my calorie limit to 1100 in order to continue losing weight, but just read on the internet that anything less than 1200 calories per day is not advised for someone over the age of 60 because you can lose critical nutrients.

I should mention that I DON'T eat a lot of carbs. I do eat plenty of veggies and I eat fruit once in awhile, but I avoid starchy, sugary veggies or fruits. I don't eat bread or pasta very often, but when I do, it's only a small amount. I do feel like I get enough protein, either animal protein or plant protein.

Does anyone have any ideas for me? As I mentioned, I have so much fibromyalgia nerve pain that it feels impossible to exercise. Just walking is very painful. It's sad because I used to be an elite athlete in my youth! So I crave exercise--I just can't do it. :-( Thanks in advance for any ideas!