Setting expectations: how long does it typically take for women to build muscle mass? 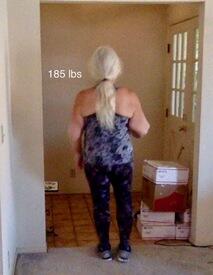 Unfortunately I recently noticed about 24 lbs of that loss was lean mass.

If I figure on parking my weight at 160 lbs, I will need to gain back at least 10 lbs of lean mass to get to a healthy body composition. To that end I've started doing yoga (as a body-weight strenthening plan) and plan to start doing kettlebell swings with a 40 lb kettlebell to build up my glutes. I figure glutes, as the largest muscle group, should yield the easiest early signs of gain--a small % change should move the scale the most. I hope to add other exercises as well but I don't want to start up too much at once, otherwise I might burn out and quit.

I wondered how long I should expect it to take before I notice any changes in muscle mass. Should I see results in a month? In three months? At what time-frame should I conclude something is, or is not, working in the quest for lean mass?

I have no idea how fast women on a moderate re-composition program (ie: not so strenuous that I burn out on it) should start to see results on an impedence scale that measures fat %. What has your experience been?

(for weight training I plan to use dumbells at home not machines at a gym. I have adjustable multi-plate dumbbells (I think up to 35 lbs with all plates loaded--not imposing but not powder puff), the kettlebell, and a weight bench that I haven't assembled. No large scale free-weights/no equipment for bench presses etc. I live alone and have no option for a spotter. I have health issues that make a gym a bad idea until covid-19 is well behind us--though vaccinated I cannot be confident that I am protected from it.)
July 17, 2021 10:08PM edited July 17
1