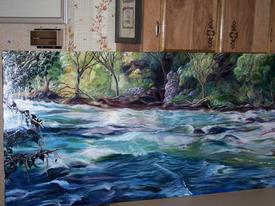 agitch Member Posts: 47 Member Posts: 47
in General Health, Fitness and Diet
I made it through the first day. It's not like I didn't know I should lose weight. Last year my Doctor called me morbidly obese. I was offended. He also recommended me for bypass surgery, saying I was a good canidate...I was offended. Since I last seem him (he is not my doctor anymore), I continued to gain weight about 40 more pounds. I have seen woman fatter than me who look morbidly obease. One day I sat on a bench infront of a hospital watching a woman being wheeled out because she was to fat to walk. I wanted to see how she got in her van. I know it was rude of me but she was what I would call morbidly obease, not me! I wanted to know what weight a person had to be to be called this offending word and did I really fit in this picture? I was surly on the way. So short and so fat. I did not want to address the issue or face it so I merrily went on my way to eat myself to death. This is a fight, a fight for my life, both my grandmothers weighed 300lbs or more, one had a stroke and the other a heart attack. My whole family is fat, what do you want me to do? I guess it is wake up time...
October 23, 2007 6:02PM
0