From strength training to bodybuilding. 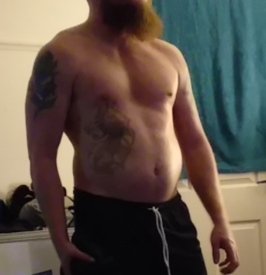 recodeexistance Posts: 51 Member
October 2018 edited October 2018 in Goal: Gaining Weight and Body Building
Some history -
I'm 150lbs, have moved up to that from 139lbs since starting training several months ago.
(Yes, i know this goes against the per year possible gains, but i'm what you could call long term undernourished ectomorph. I ate, but didn't eat often, for a long time. ((see - ate when i was hungry - - that was rarely)).

Now, I'm what you could now call 'skinny fat'. I've been following SL 5x5, which HAS been doing me well. I've saw weight gains and **fairly decent** muscle gains.

But, after some research, i'm learning this may not be what i'm looking for. I'm mainly weightlifting because i'm fed up of being the 'small guy' in the room. A lot of this has to do with confidence. I have a lot of anxiety based on violence, if that makes sense? (small guy = weak = unable to defend himself = don't look too long at that person passing!)

So, while i want to be strong, and 5x5 has helped me with that, i'm learning i should maybe look more at hypertrophy based bodybuilding for my current goals? Not only do i want to look strong , denser muscle, i want to mainly look bigger than i am.

Start weight - 139LBS,
Current weight 150ishLBS,
Goal - mainly aesthetics, but strengh would be good too.
Current diet - whole foods, around 50 to 250 calories above TDEE per day (not 100% clean, i have nothing against the occasional soda, choc, or alcoholic night.). protein powders used, creatine mono used, daily vitamin, and considering adding BCAA after i do more research.

TL;DR
Can anyone recommend a good programme for beginning bodybuilding (not overly complex, preferably 3 day split, i work monday to friday.) that would fit my above profile and goals? Willing to consider more days if explained how to fit in with my goals / available days.

--edit-- Before people jump on and say my current weight gain is too fast, i've been thinking that too. BUT, i'm still basically skinny, my stomach has increased a little in fat, but overall my muscle development alongside this has been middlingly good.
1
«12»