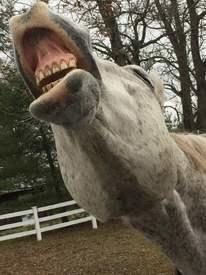 3greyhorses Posts: 529 Member
August 2020 in Health and Weight Loss
After years and years of yoyo-ing on everything in life, I'm wondering if I even care anymore. Yearly, monthly, weekly, daily I go from super motivated to lose weight and reach other life goals, only to fail to follow through. The time is flying by and I'm no better off than I was a few years ago. I'm exhausted and honestly, am not even sure if any of it even matters anymore. Why keep trying if I'm only going to let myself down once again? What exactly is it I want, anyway? My husband and I are in a complete rut after 25 years of marriage. We're deeply in debt, we're just drudging along day by day, not really healthy, not really motivated to change. We drink beer and eat "bowl snacks" in front of the tv every night. I'm active during the day, working on our horse farm, walking and swimming. No matter how active I am, I never lose any of the 30+ extra pounds I'm holding onto. I know it has to come from diet, but I just can't seem to maintain the dedication to eating healthy. I'm starting a new job this week and am an anxious mess. It's a part-time gig that shouldn't be stressful, but since I'm feeling so *kitten*, weak and have no confidence, it's making my anxiety skyrocket. I'm coming off an injury and haven't been able to swim, walk or ride my horses for 2 weeks so I know I'm depressed. I keep reminding myself that those things will be back to normal soon and the job will be fine once I get started, but deep down I just keep wondering what is it I want and why? I feel like I'm tired of just letting time go by as if I'm counting down the days to death, but am not sure I have it in me to strive for more given my past failings. I feel like I'm at the point where I just can't organize my thoughts to make a plan that I can stick to.
Any advice on how to pull myself together?
I'm very much a checklist kind of person so I'd love to hear from those who have daily/weekly/monthly/yearly checklists.
30