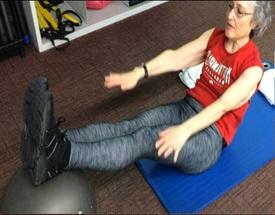 mylittlerainbow Posts: 823 Member
October 2021 in Goal: Maintaining Weight
The pandemic was very good to me - no stress, no classes to teach or events to lead in person, no socializing with friends (which invariably means either eating a meal out or going to an event that includes food). Left home alone most of the time, I could control every bite that went into my mouth and I did great.

In the past 6 weeks, I've gone back to my binge-eating/yo-yo-ing, which I had resolved I would never again do, and I'm hating myself for it! Partly because in-person things are resuming and I am a stress-eater and now have to prepare classes and programs and get places and present them, and partly because my friends are ready to socialize again and want to eat out, and although I do choose from menus in advance, it's harder to control every bite in a restaurant.

I am now up 8 pounds, which is 5 pounds more than what I had set myself as an upper limit. I am logging diligently but terribly upset with myself over putting myself in this place once again, where I have to limit my calories so severely and wait who knows how long till I'm back down where I "belong". It was almost a year of maintaining at this point!

On the positive side, of course, I caught myself and did not blow up again (overall loss was more than 45 lbs) and am taking appropriate steps, but on the negative side, there's the destructive self-talk and the depression over going through this all over again when I'd already spent 15 months on the reducing diet that I had vowed would be my very last one because it was such hard work.

I feel that i have to confess to this group and perhaps will do better being more accountable to others beyond myself, but the self-hatred and the endless cycle leave me unable to believe in myself for the future. Fortunately, I didn't succumb and have caught myself and still can fit into my regular clothes so that maybe others can't really tell while I work back down again, but the revulsion and self-hatred are all too real. I never wanted to experience those again.
36
«12»