The emotional aspects of a large weight loss 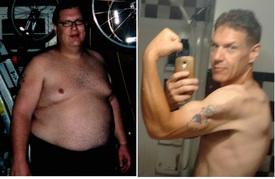 msharrington315 Posts: 200 Member
August 2015 edited August 2015 in Motivation and Support
I never dreamed I would be here telling all of you that since June 2014 I have lost 209 pounds without surgery or being on a "diet". The feeling both physical and mental is amazing. And, as you can imagine, people around me are inspired by my accomplishment. This only motivates me more to continue on this journey.

Having been morbid and super obese since early adulthood, I had a lot of emotions wrapped up in all the fat my body was carrying. I was ashamed of my body and myself and eventually to the point of giving up the will to live. Compound this with all of the co-morbidities I had developed: pre-diabetic, high blood pressure, sleep apnea, gastric reflux, fungal infections...

I had a number of things that triggered me to lose all of this weight once and for all, but the biggest factor was the loss of my dad in 2010 to lung and colon cancer. He was a heavy smoker, drinker, and ate poorly. The event was so traumatic to us all that I told my mother that I wasn't going to let his death be in vain. We need to learn from his poor health habits.

After I lost a large portion of my weight I still felt "fat". I have read that many people felt that way after a large weight loss. Especially if you carried it for the majority of your life like I did. Now that I am "normal" I am starting to feel normal. But it is still taking time to adjust.

The other interesting thing that I had not considered when I embarked on this journey was how others react to me. The majority of people are very happy for me and inspired to take on their own health journey... because of me. But there are others who have had strange and even negative reactions towards me. I still find it puzzling, since I saved my own life and would think they would be happy for me.

I want to hear others' stories about your emotions and the reactions you have gotten from others after your weight losses.
0
«123»