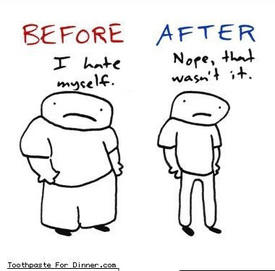 nelinelineli Posts: 330 Member
September 2013 in Motivation and Support
Hi there,

I work with numbers for a living and when I started this journey 2 months ago I decided to gather as much "data" as I can in order to figure this weight loss thing out - I weigh myself daily and keep track of calories in and out.

Since I've seen a lot of posts from disheartened people that feel they're plateau-ing few weeks in or that have gained weight when started a new exercise routine, I thought I'd share my results with you:)

First, a graph of my daily weigh-ins and the intuitive interpretation many people give to what they see: Seeing your weight stagnating (even going up!) after 2 encouraging, huge-loss weeks, is definitely unsettling, especially if you've picked up a new exercise routine (I was doing 30DS). It's often the point where many start wondering if they should lower or increase their calories, question their health and "metabolism", making up for half of the threads around Now this looks a bit better, doesn't it?

Few points I want to make:

1. If you follow the "expected loss" vs. the actual weigh-ins you can see there's no real plateau, because it did not "stall" the weight loss. It's simply a temporary weight retention of some sort (most likely water retention from the muscle-burn inducing 30DS program). IT DID GO AWAY (dropped 1.5 kg in 2 days).

2. The same effect did not appear with the Insanity workout, but I have heard many people doing Insanity complain about weight not dropping, so I'm inclined to think it's because my muscles were already "in shape" due to the previous workout - and I don't feel the "burn" anymore - it's mostly cardio for me. So if you're doing something new that hurts, be patient!

3. "Calories in minus calories out" gave me a very accurate estimate of my actual weight loss. I don't even have fitbit or HRM, I have to guess food calories sometimes. I have used a ballpark 1600 calories for my TDEE excluding exercise (a rough average of values a few calculators gave me). And yet, results don't lie: net calories = weight loss.

4. Emotional rollercoasters and daily weigh-ins.
I know the common wisdom is to only weigh yourself once a week. I also understand why. However, if you're the sort of person that feels "knowledge is power", having such data can actually help control emotional breakouts, because you can learn a lot about how your body works and are less prone to being mislead. Seeing numbers really adding up to a T makes me feel in control.

For ladies, I have included my periods (purple *) and expected ovulation (pink *) dates. I personally do not think there's much of an effect BUT I did notice I eat a bit saltier or simply more during that period which might trigger a temporary weight gain (A lot of the spikes up are days after high-sodium sushi dinners

There's no surprise there but I'll say it anyway: all those drops in weight = BMs. It's the one most reliable factor. So before you panic about your weight stalling, think about when's the last time you went to the bathroom.