One year on MFP - 82 lbs lost, so much more gained 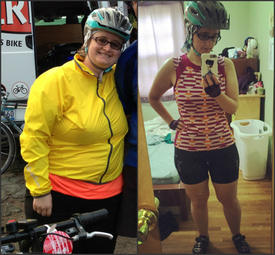 UmmSqueaky Posts: 715 Member
December 2014 in Success Stories
So this is it. The post that has been bouncing around in my head almost since the day I started on MFP one year ago. And now it’s here and I can’t believe I made it. Be forewarned, this post is long and picture heavy, because I’m so darned excited, I just have to tell the whole thing.
I have been overweight almost my entire life. As a child and teenager, it wasn’t anything more than a little extra pudge. But, I thought I was fat fat fat fat fat fat fat. That negative thinking became a self fulfilling prophecy. From a little overweight in my teens, I gradually put on weight in my 20s. I didn’t get out and do much, and avoided having pictures taken of me (after all I was fat so why would I want to look at that). I went to the gym off and on, tried eating “healthy” off and on, tracked my food on sparkpeople off and on, tried weight watchers off and on, and the weight kept on creeping up.

Then, in 2013, I started to go out and enjoy life. I went to Costa Rica with my sister, and posted the pictures of the wildlife we saw on Facebook, but none of the pictures of myself. I started to cosplay, and although I was proud of my costumes, the pictures didn’t make me happy. But I still didn’t see it. 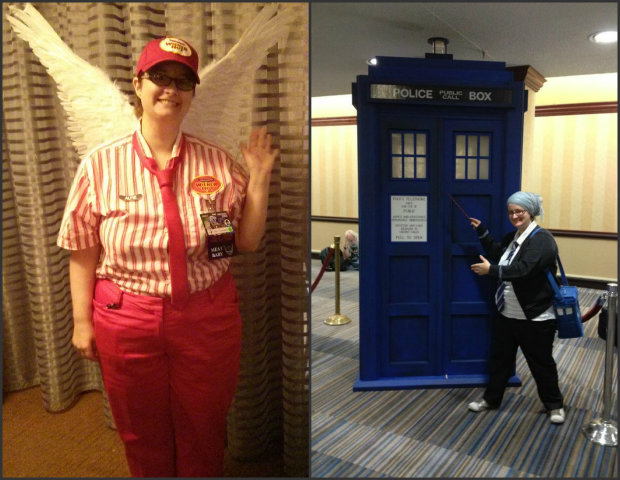 I started biking. I biked 60 miles with my dad, and took a picture of us together that I intended to frame and give to him for a present. Yeah no, that picture never made it to the printers. And then at Thanksgiving last year, I went to a Doctor Who convention. I had a new costume, and a photo op with 3 doctors. I was so super psyched. Then I saw the pictures and my heart plummeted. 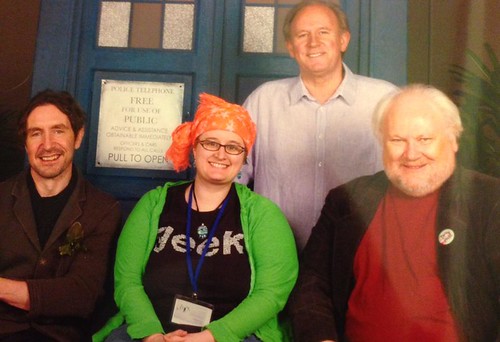 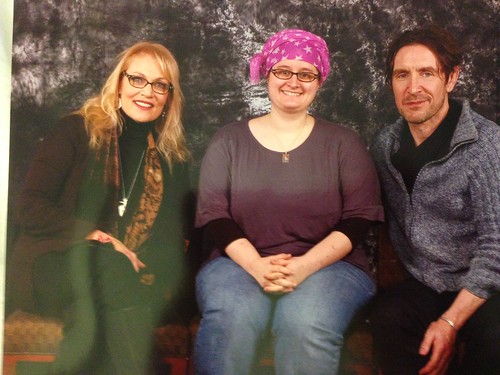 I wasn’t just fat. I was obese. How had I let myself get to this point? I was 5’1.3 (yes that .3 is important when you’re short), and 205lbs. That very weekend I vowed that I would make a change in my life, that I would lose weight and that come next Thanksgiving, I would totally rock the convention.

So I got home from the convention, logged onto MFP (which I had tried a year earlier and failed to keep at), and have been faithfully logging for 365 days. The first month, all I cared about was keeping under my calorie goal and weighing all my food. Looking back at my diary that first month, I ate cold cut sandwiches with exactly 1 TBSP of mayo (thank you food scale), cheese spread and crackers, and other things that aren’t considered “healthy,” but I ate them in the right amount, and I started to lose, 1 to 1.5 lbs a week.

I also started being physically active. I went to the gym, took weight lifting and aerobic classes, and walked over my lunch period.

The next month, I worked to increase my veggie intake. The following month, I worked to reduce the amount of sugar. The next month, I worked to up my protein intake. And after that, I continued on as I was. I don’t eat clean. I eat fast food a few times a week. In general, I make better food choices, but I haven’t banished anything from my diet. I do plan what I am going to eat. I can’t just decide on the spur of the moment I’m going out for McDonalds, if I’ve already had a decent size breakfast and lunch. Instead, I plan to eat McDonalds on Saturday, when I can make it to the gym, and fit the fast food meal into my calorie limit.

Once spring rolled around, I started biking to work. First I took the most direct route, which gave me 14 miles a day. After awhile I started to enjoy it so much I looked for longer routes, and was soon biking 30+ miles round trip.

So that’s what I did – I ate what I wanted, just so long as it fit within my calorie limits. I didn’t give anything up except for large portion sizes and eating out every day. I ate less and I moved more. And I kept doing that, day in and day out, month after month.

At the end of March, I hit 27 lbs down. In October 2013, I needed to buy a new suit coat for work (shockingly all of mine were too small), and found myself in the plus size clothing section at Target. I was heart broken to buy a size 2x. After losing 25lbs, I was able to get a size XXL. By May, I had lost 35-40 lbs, and the XXL dress was far too big. Definitely should have bought a smaller size for these pictures. 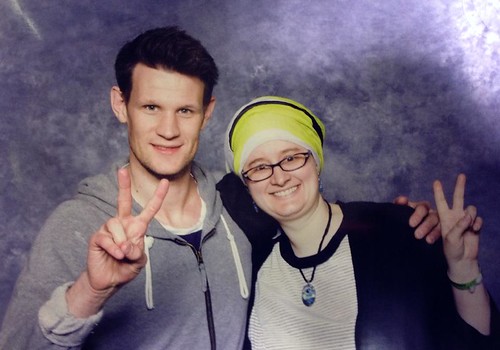 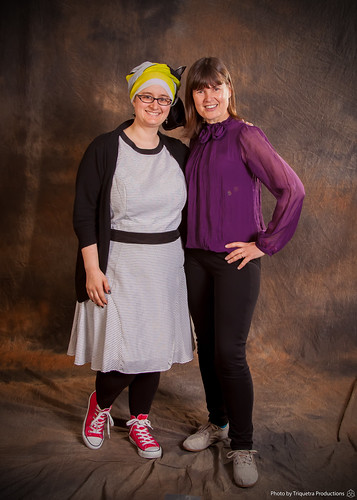 The big local convention rolled around 4th of July weekend. Now I was down 50 lbs and had a blast in costume. 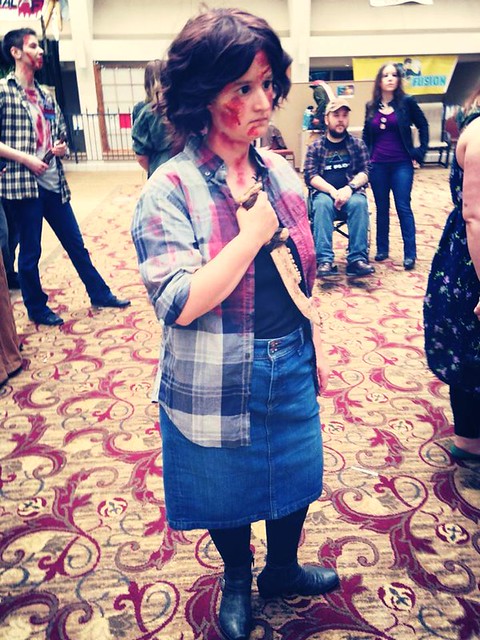 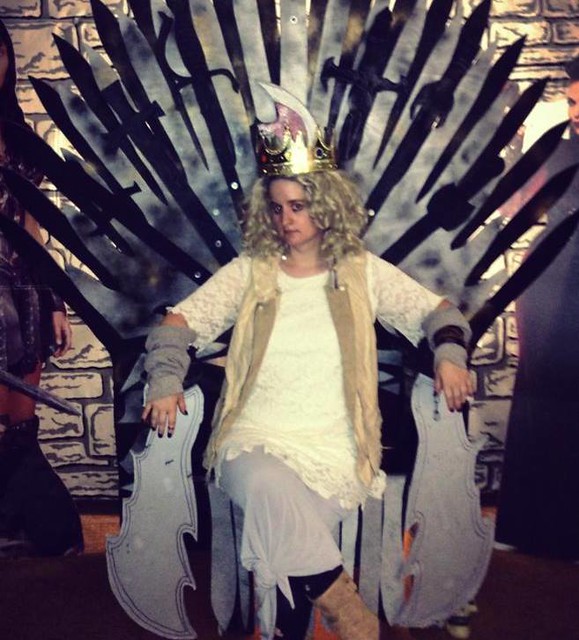 In August, I attended the 2nd Annual Cat Video festival. Down 57 lbs, and wearing a Target L dress. Biked the same 60 mile ride with my dad at the beginning of September. Went from bursting out of a women’s XL biking jacket and size 18 pants to a swimming in a size L top and size 12 pants (at this point I didn’t want to buy new clothes quite yet). End of October I went to a Packers gave, and was 72 lbs lighter than I had been when I went to Lambeau the year before. And now here we are, 365 days later. 82 lbs down. I smashed my original goal of 75 lbs to lose, a goal I set arbitrarily a year ago because it would put just inside the normal BMI range. A number I never thought I would actually reach. And yet here I am, having lost all of that and more. I now wear a size small Target dress, and a size 6 in some designer sizes. I own a whole closet full of dresses, it’s almost obscene. I went to my Doctor Who convention this last weekend and had one of the best times of my life. I did rock my costumes. I met a bunch of really great people. And I had a blast. I’d still like to lose a little bit more weight, but I’m not sweating it right now. I upped my calories to maintenance a week ago. I took a break from weighing my food over Thanksgiving, but as soon as I got home, I got right back into the swing of things. I know that if I let my guard down, I could very well gain the weight back. So this journey isn’t over. No, it’s a path I will be walking down the rest of my life. I’m short and I sit at a desk all day. If I’m not biking 30 miles a day, I don’t need a lot of food. So I need to make sure I’m staying on track. I will never see the other side of 200 lbs again. Heck, I will never see the other side of BMI overweight again. I will keep this up, I will keep logging, and I will continue to go out and live my life. It feels amazing to be here, and I don’t want to lose that. Life is too much fun to spend it fat, grumpy and sitting at home. 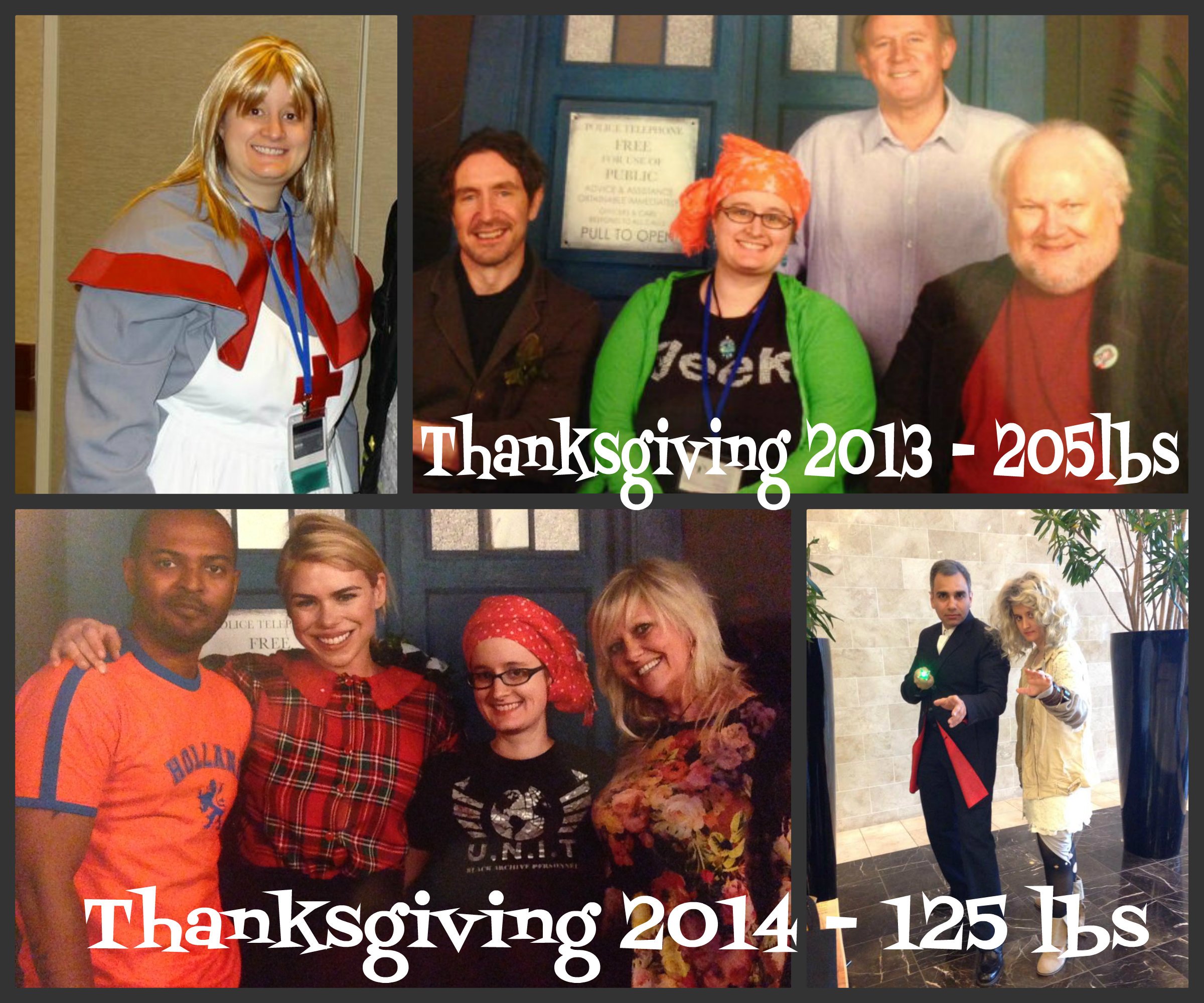