Just Another Plateau and Weigh-In Thread

Who is tired of all the threads about plateaus and asking for advice about how often to weigh – show of hands?

Alight. Almost everyone raised their hand. I know that not because I am looking through your windows, although with all the weight some of you have lost you are becoming more Peeping Tom worthy. I know because the forum is littered with them.

What I hope to address is how misinterpretation of our scale reading (body scales not food scales) can lead people to believe they are not losing weight.

I don’t know what a plateau is in the context of weight loss. I know what people think it is but if someone is eating at a deficit is it possible not to lose weight? I don’t really care to tell you the truth because I have yet to see this infamous “Plateau Monster” actually show itself for real in any of the threads I have seen.

So let’s get to it;
This person has weighed himself three times. Let see, by a raise of hands (participation please), how many people think this person has achieved this mythical plateau? 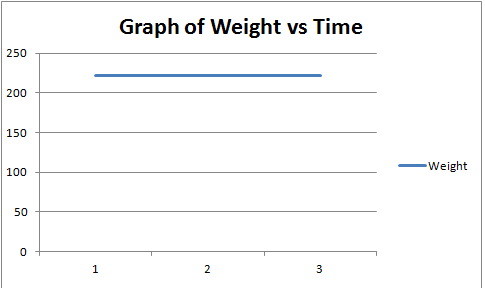 Answer:
Those of you that raised your hand put it down. We don’t know. We have no idea over what time frame this data was recorded. So rule number one. How long as it been since you have shown a loss?

Well glad you asked. I have this next graph. I don’t like to weigh myself everyday because it freaks me out when I gain weight so I think if I weigh myself every couple of weeks, or once per week, it will get rid of the water retention type stuff. Again, show by a raise of hands who thinks this person has reached a plateau? 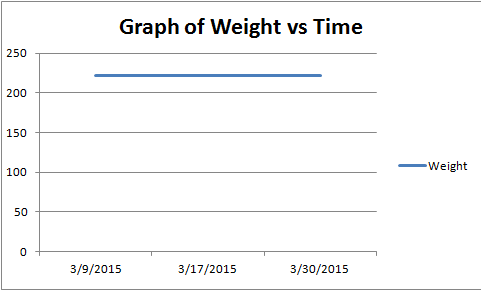 Answer:
Those of you that have raised your hand put it down. We don’t know. First, three weeks is not a long enough time frame and secondly we have only three data points.

How many times have we heard it? Weight loss is not linear!

But we end up with this type of thread;

“OMGOMGOMG it’s been three weeks and I haven’t lost a pound!! Help me! I am eating at a deficit and I have done my detoxes. I strong lift three times an day and run the equivalent of a marathon every week all the while tending to my six hyperactive kids! I know for a fact I am eating below deficit. I even waited two weeks between weigh-ins and still the same! Please oh please do help me!!”

This then inspires a long discussion about weighing your food and being diligent about logging (which I am all for and I think it is very important). There is discussion of weight loss not being linear and three weeks is not a plateau. This discussion is somewhat pointless however because biggest problem we have is that our data has very poor resolution. We have three data points and you know what they say about three data points….”LOL sample size”.

So let’s look at the same date range but fill in the missing days; 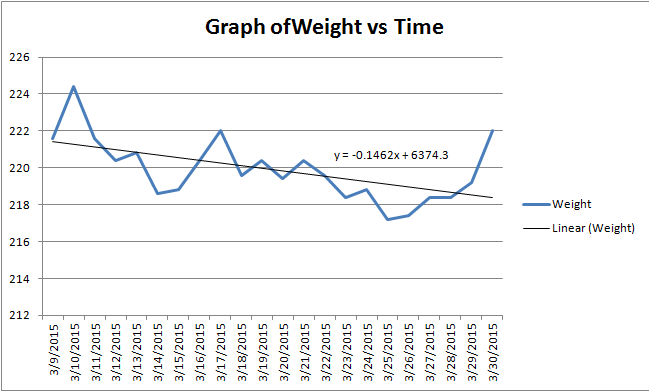 So, again, by a show of hand, have we reached a plateau?

Answer:
Clearly not. The plateau monster has evaded capture once more.

This is the exact same data presented in the other graphs but with just more data points – 19 more data points to be exact. I added a trend line - you know because when tracking weight loss it’s all about the trend - and I also added the equation for the trend line which is important. See the number right before the “x”? It says -0.1462. That means this person’s weight is trending lower by 0.1462 pounds per day. Per day! That is 1.02 pound per week with a goal being 1 pound per week (lolol…okay you got me. This is my weight data so it’s my goal). I am actually right on track!

So do you see how one person can post a freak out thread in the forum about not seeing a loss for three weeks and another person with the exact same scenario is tooling right along and is perfectly happy with how things are going?

To delve into this just a little bit further (sorry

), I have 118 data points for my weight. Because Excel allows a person to rule the world I asked myself the question; If I weighed myself only once per week how often would I show a gain and how often would I show a loss? So what I did was subtract two data points that were eight days apart (simulating weighing myself on the same day of the week once per week). I ended up with 111 data points. Eighty-six times I would have shown a loss, twenty times I would have shown a gain and five times it would have been the same as the previous week. About 22% of the time I would have been heartbroken and thus a plateau thread.

I am sorry of this is long winded but I just wanted to illustrate the fluctuations in weight loss and how they can lead people to post needless threads and maybe make unneeded changes to their plan. Understand your data the power of it. If you think of weight loss as a game, weighing yourself everyday is like a baseball game. If you get beat you are right back into the game the next day with a chance to win. However you experience losing more often. If you weigh yourself once per week and you get beat you have to brood for a week before getting a chance to win again. But there are fewer lost games. They each have their advantage.

In before there is a plateau thread or a weigh-in thread before this tl;dr post makes it to the second page.