Was I being ignorant to my vegetarian friend? 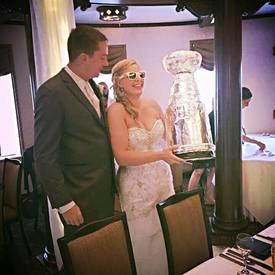 So I love meat. I love steak, I love chicken, I love fish and shellfish, but I don't have a problem with people who don't eat meat. As much as I enjoy the taste, I respect other people's views. I'm more than happy to accommodate my vegan or vegetarian friends when I host dinners and parties, and I do have a lot of friends who abide by this diet.

Last night, a friend of mine (not a close friend but we still hang out occasionally) posted on Facebook that she was traveling and asked for suggestions of things to do in the cities she is visiting. One of the cities has a hamburger that it is famous for called the Horseshoe Burger, so I suggested to her to try that if she's up for an adventure. She immediately posted back in a very defense matter "Uuuumm... I don't eat meat, so no." Like I said, I am not close with this person, but I feel that her response was extremely rude. I am not overly sensitive to things such as this, but I had no idea she was vegetarian and obviously wouldn't have suggested that had I known. Do you guys think I was wrong in suggesting that? I don't know why she reacted in such a way. I think the best response would have been to just ignore what I said instead of shoot it down within 30 seconds of me posting it or to white like and say something like "Ooo- that sounds interesting! Do they have a vegan version?" I know Facebook is a breeding ground for passive aggressive people, but I just wanted to see if any fellow vegetarians/vegans thought if I was being too forward or rude!

PS- Don't eat the horseshoe burger if you are on a diet. It's an open face burger with cheese fries on top!!!!